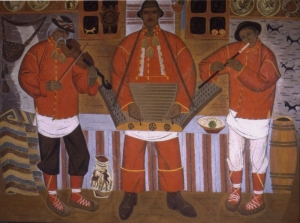 Veniamin Kushnir belongs to those few artists, who, over the stuffy years of totalitarist system and sotsrealism, made their way in the Ukrainian national art. “I am a Ukrainian painter and my art should be national” – this was his motto. Romantic and thinker, he always strived for freedom, painted only what he wanted to, what really touched him.

Feeling of the social responsibility for the historic fate of Ukraine was crucial in the creative conscience of the painter. He participated actively in the “sixties” movement, headed painter section of the Club of Creative Youth.

Veniamin Volodymyrovych Kushnir was born on the 7th of January 1927 in Rudka village of Khmelnytska oblast. His mother was from a respected wealthy family, her two brothers were Ukrainian Rising Army members. The spirit of the national self-realisation guided him from the very first years of his life – as well as mother’s song and Shevchenko’s poetry. Childhood and teen years passed on Podillia. This is where he felt himself a painter. Veniamin got professional education in the Lviv Institute of Applied and Decorative Arts (1948-1953) in workshops of R.Selsky, I.Gutorova, Y. Bokshay. Student years were full of persistant work, the painter was looking for his own style. His position in painting was early determined – it was based on Ukrainian arts tradition, folk culture, Skovoroda’s philosophy, Shevchenko’s creative genius and Arkhypenko’s and Boichuk’s avantgardism.

After graduation V.Kushnir lectured in the arts school in Dnipropetrovsk. From 1954 he joined the Painters Union. In 1956 moved to Kyiv where he created his big drawings “Woodchoppers”, “Plotogony”, “Red poppy flowers” – they were masterly, kind and sincere.

“Trembita” (1961) became the turning point, a symbolic appeal that woke up the national conscience of the contemporaries.

Several directions can be traced in Veniamin’s art, or, rather, several joint images that allow us to say that he was a painter-thinker.
Spiritual code of his Universe was dominated by the image of a Ukrainian mother that is embodied in a number of paintings: “The bride”, “Mothers”, “Nothing is better”, “The land”, “The grieving mother”.

An important content was also loaded in his pictures of horses which he loved and painted with pleasure – in “The morning”, “Puta”, “Horses”, and “Kobza”. Direct appeal to the defense of suffering Ukraine is in the picture/pamflet “Scertso” (“Raped Ukraine”, 1968).

Tragic moods of the last paintings (“Farewell melody”, “Avtoportred with the candle”) are brought about by the feelings of his own fate and bitter contemplations about the place of a human being in this society.

Phylosophical understanding of the complexity of inner world of a man is embodied in numerous portraits that reflect Ukrainian national character. His drawing of nature are fine and technically perfect, the painter sees the romantic beauty of his country. He is in love with the Carpathians, Podillia, Kyiv – places where the history of Ukraine was made. V.V.Kushnir was a God-gifted painter. Besides, he was a highly educated man. He knew Ukrainian and world literature, history, phylosophy, arts, musique. Poetry and musique were an inseparable part of his being, they sound in his creations.

As an artist of a high professional culture, he could not live without everyday work. Every painting of Kushnir is an outcome of persistant work and spiritual effort.

Despite the tragic time of his life and creation when all pushed to untruth and dishonesty, he never betrayed his ideals. He was and stayed a social painter. He has the right to repeat Shevchenko:

We just went on; we didn’t have
a bit of false in our souls…